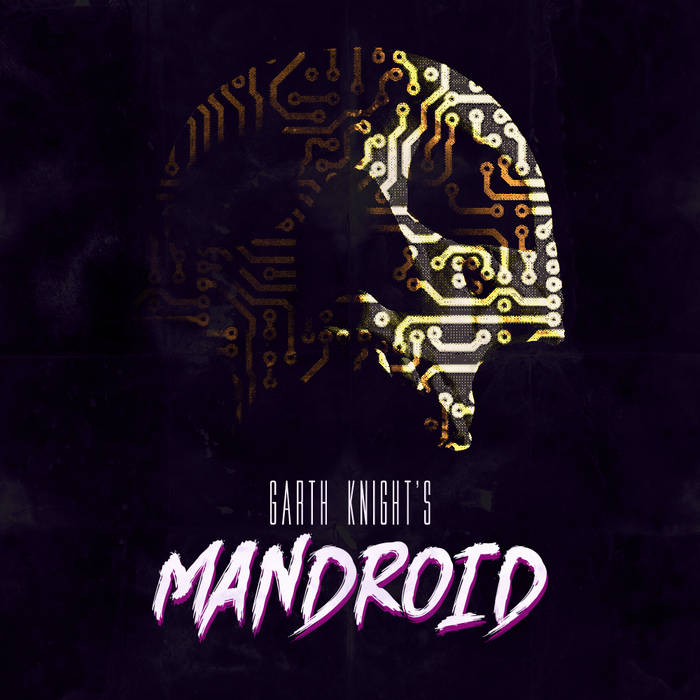 kmxexii Garth's collection albums are pretty cool, but when he's got a concept, he's a force to be reckoned with. Mandroid is an outstanding EP that shows the artist's flexibility, with some dark-tinged outrun (the vaguely creepy, digital "Construction" and the slightly more intense "On the Run) and the moody, mysterious "Escape". The haunting beauty of "Sanctuary" brings us to the climax, when Mandroid shows himself more man than android in the mournful "Shut Down". I can't wait for Garth's next story. Favorite track: Construction.

A John Carpenter-inspired concept album telling the story of a synthetic man’s journey to self-realization.

As the assembly line hammered on, the silhouettes of human-shaped figures could be seen as sparks flew behind them. The rhythmic droning of the machinery served to create the semblance of life that would soon be switched on within the artificially constructed bodies. Model number MNDRD-1138 was the most advanced fighting machine that ZenoCorp had conceived. A creation born of greed by powerful figures within the military industrial complex. A creation that defied the wishes of the crumbling government and the general population that lived their lives in fear of it.

Weeks after completion, Unit #TF12 aroused from his slumber, feeling as though he had awaken from a dream. He felt confused. As his vision began to clear, he gazed upon the faces in front of him. Faces that he would soon discover to be identical to his own.

Upon further inspection of his apparent twins, he realized that he wasn’t the person his creators lead him to believe he was. The false memories of a pleasant childhood, a loving wife, and happy children soon faded. As he glanced into the eyes of the yet-to-be activated units something changed in his artificial heart. This wasn’t right. This isn’t why he was brought into this world.

Moments later, after peeling electronics away from his synthetic flesh, a siren began to wail. His creators would surely destroy him if he were discovered to be self-aware. He had to escape.

As he quickly sprinted down seemingly endless corridors, bypassing security cameras, locked doors, and ZenoCorp’s armed guards, he quickly realized that he was more than a mere man. His robotic innards gave him the strength of ten men, and the keenest senses that the year 2082’s most sophisticated technology could provide. As he made his trek away from the confines of ZenoCorp’s prison-like factory, he felt alone. As if he had nothing to care for but himself.

After countless days on the run, and restless nights sleeping with one eye open, he began to ponder the future of his existence. Eventually, he came to a place that seemed alien when compared to the concrete walls that encapsulated the smog-ridden super city he had escaped. A color struck his robotic eye; a shade of green refracted by a small grove of trees. After approaching cautiously, more vivid colors began to grab his attention. The clearish-blue hues of a babbling creek. The dark brown shades of moss-covered logs. In the distance of his sanctuary he spotted a fawn feeding on the gently swaying grass. He saw birds fluttering between the bushes and clouds floating carelessly across the sky.

He no longer felt alone, but instead was filled with a sense of belonging. Inspite of his robotic body, he was simply another creature inhabiting a densely beautiful world. He now understood that his purpose was not to destroy life, but to protect it. As he looked at the shining sun above, he had a flashback of the factory in which he was manufactured. A factory filled with tools of violence. Tools that must be destroyed.

With a deep sense of sadness, he found himself in the place which he had desperately tried to escape. He gently touched the faces of his brothers, closing their artificial eyelids over their iridescent mechanical eyes. As he made his way to the master control booth, he felt something slide down his face; something genuine humans call a “tear”. He didn’t know whether it was from sadness or joy, but he knew that it came at the right time.

As he approached the master control station, he spotted a control board. A giant lever amidst the array of blinking lights called to him, but gave him a sense of uneasiness knowing that activating the device would destroy the compound. He rested his hand gently on the switch as the factory’s alarms began to howl. He closed his eyes with comfort as everything faded to black.