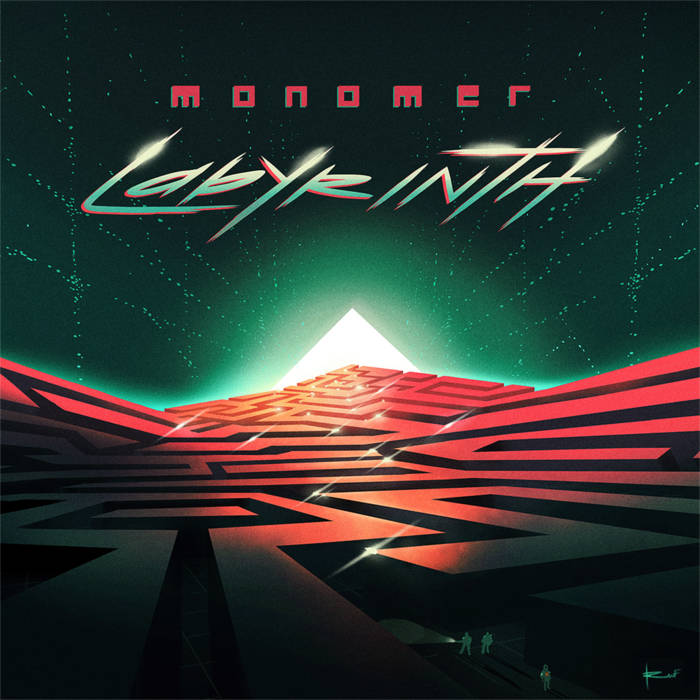 Mishka The perfect fusion of Synthpop and fakebit, with the perfect garnish of guitar. Simply Fantastic. Favorite track: Chrome Castles.

Blue Navi There's something about the sound that Monomer goes for that really resonates with me. The tracks range from mysterious to energetic and super lively. It's an amazing mix of chiptune and electronic/80's/synthwave! I can't believe it took me this long to get the CD but I know that it's an album to remember for years to come. Favorite track: Fata Morgana.

Lars Shurilla Monomer follows up his fantastic 'Quite Operational' with even more polish and pizzazz. Favorite track: Arcana Engine.

Labyrinth is everything I love about synthwave and chipmusic: chunky staccato bass lines, soaring melodies, oceans of spacious reverb and heavy, pumping drums. It was written between daydreams of androids, brain-hacking, and digital kingdoms fraught with the monsters in the machine. It was the most fun I've ever had working on music, and I hope that shows in each and every track.

Written gradually over the course of a year and a half, Labyrinth turned out to be the biggest musical challenge I've faced so far. It incorporates a wide array of instruments, from synths like Plogue’s Chipsounds VST and u-he’s Diva, to live guitar on a Fender Telecaster. My main goal after Quite Operational was to create an album where each song had a unique character, not only in the composition but also in the arrangement, production and mixing. This led to a lot of new territory for me, which was both exciting and terrifying, but I’m extremely happy with the end result and can’t wait to share it.

This album wouldn't have been possible without help from some fantastic friends. A special thank you goes out to Bill Mueller, Trevor McEwen, Mark Barry, Tim Gardiner, and Katie Trotta. In addition, a huge thanks goes to Steve Jenkins at Telefuture and C-jeff at Ubiktune for their encouragement and advice with this release, and to Rufus Blacklock for his awesome artwork and incredible enthusiasm. Cheers!

Monomer is the musical alias of Gavin Allen. Born in Massachusetts, he still lives in the Boston area, working in game development by day and cranking out wicked bizarre jams by night. His musical journey began in the 3rd grade orchestra, taking pit stops in a handful of rock and jazz bands as well as the Berklee College of Music before winding up in the wonderful world of chipmusic.

Telefuture is proud to do our first split-release with the incredible chipmusic oriented net-label, Ubtiktune. Check out their stellar catalog, here:

Featuring appearances from Kari Faux, Bluestaeb and and interview with NY-bred artist Wiki